Fjorden Rundt is a 200 km bike race around Trondheim’s fjord, and falling just over a month before Jotunheimen Rundt, was the perfect test race for our team. Since the location of our riders is split evenly in Trondheim and Oslo, 7 hours apart, we don’t get the opportunity to ride together that often, so Audun, Marius and I made the journey to Trondheim to meet the rest of the team.

This was actually my first road race ever. It was very low key, with no timing mats and even no start line. There was just a guy with a clipboard who called everyone’s name and then shouted GO!, and we were off.

Our group of 6 riders latched on to a peloton of 40 riders, hanging on to the tail. It was exhilarating to ride in a big group like that. Sometimes it was no work at all to keep up, but when the top of the peloton crested a hill top group stretched like an accordion, and those of us on the tail had to pedal like mad to prevent falling off the back.

The jerky pace was a bit stressful, so when some in our group fell off the back, we decided to start our own grupetto, which was better practice for Jotunheimen Rundt in any event. Soon I began to struggle with our pace. I felt fine on the flats and descents, but watched my heart rate shoot through the roof on every little hill. Was this a sustainable pace for 200K? Would I even be able to keep up with our team during Jotunheimen Rundt?

Most of Fjorden Rundt is punchy, rolling hills, but there is one longer climb after 30 or so kilometers. On the climb, I watched Noëmi and Fredrik bolt up the hill like they were on a two hour ride. I felt miserably inadequate. Was I doomed to be the weakest link on the team? Were the hours and hours spent riding this year all for nothing? 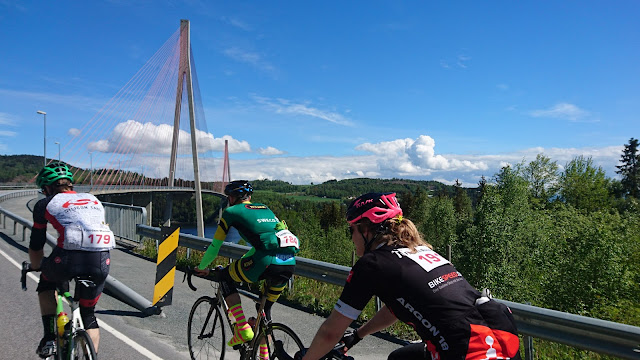 I finally made the wise decision to stop looking at my heart rate monitor, and just enjoy the beautiful, sunny day. This would be a test: either I would blow up due to the too hard early pace, or I would learn that I could keep this harder pace for 200K. I keep my own, easy pace on the hills, and Marius and Audun would help ride me up to the group after hill tops.

As the race continued, our team began to ride more like a well-oiled machine, practicing our double paceline formation until it felt natural. The advantage of the double paceline is that you can chat with your partner as you go along, and with good company the kilometers passed quickly. On our way we passed several stragglers who had lost their groups for whatever reason, and let them draft off of us for a while.

With only 20K to go, it began to rain heavily and we called a stop for rain jackets. I was just glad we had had sun for most of the day! It was really wet, with dirty water spraying up from the road, soaking every inch of me not covered by rain jacket.

On the final climb to the finish, we saw another team a couple minutes ahead. “Let’s go, we can catch them!” someone shouted. I put my head down and rode hard, but, in my mounting fatigue, fish-tailed into Fredrik’s back wheel. I yelled unintelligibly as I flew off my bike into the ditch on the side of the road. It took me a moment to take stock, but I realized that I was fine, with the exception of blooded knees. Shaking a little, I got back on my bike and we road calmly to the top of the hill and the finish.

I later noticed I had bent my front wheel, and I’ve added crashing to my list of Jotunheimen Rundt fears. Since I crashed, at least partially, because I was tired, won’t the chance of crash increase exponentially as fatigue mounts? I guess I will just pound caffeine and try to stay lazer-focused.