I’m now only two months out from this season’s first big race, Jotunheimen Rundt. It would be an understatement to say I am intimidated by this 440 km road bike race, labelled Norway’s toughest cycling sportive. I’ve never done a road bike race before, let alone one that will take me nearly 20 hours. Heck, I’ve never done any race that took me anything near 20 hours!

Luckily, there’s a little help from my friends to be found. It turns out I know 8 like-minded individuals, and we’re planning to ride together during the race. Hopefully that will make the hours pass more quickly, and the low points higher.

When I signed up for the race, I originally envisioned myself doing all sorts of fancy intervals to get into killer bike shape. But my training has slowly broken down into the ultramarathon mentality of ride as many miles as you can. I ride my commute to work as often as possible, and I’m also trying to get in some really long rides, using the time to practice eating on the bike and getting my legs (and butt!) used to a long day in the saddle.

Here’s a quick recap of my long rides so far.

Long ride 1: Nesoddtangen - Drøbak - Ski
My skinny tire season started on a beautiful weekend in late March, the week after the Birkbeiner. Marius and I set out to take the boat across the fjord to Nesoddtangen, and then ride around the Nesodd peninsula back to Oslo.
The weather was absolutely gorgeous and we were both overdressed, expecting colder temps this early in the season.
After stopping at a bakery in Drøbak for refreshments, we decided to follow the bike route signs towards the town of Ski on our way home. The bike route took us for a wild ride, on a dirt road and then some trails via a stretch of ice, which Marius decided to ride. I tried, rather unsuccessfully, to follow suit. The moral of the story: bike paths aren’t always made with road bikes in mind.
Surprisingly, it wasn’t my legs that protested after 4 hours in the saddle but my neck and shoulder. My head seemed to get heavier and it was more difficult to keep my eyes focused on the road. 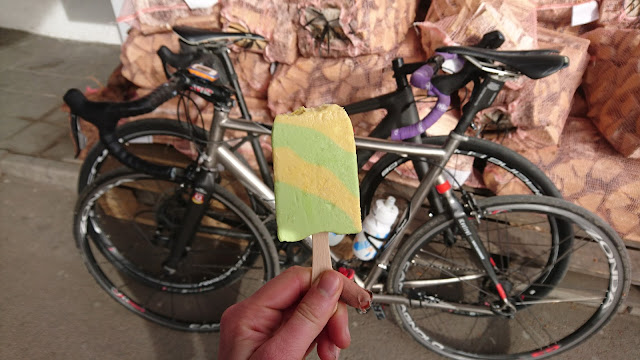 The next weekend, Audun and I visited his parents on the west coast of Norway. Audun’s father Odd Arild is an avid road cyclist, so nothing would do but we get in a ride on his home turf. 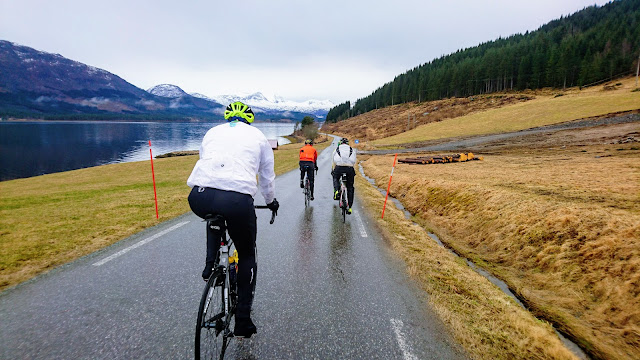 It was a drizzling, dreary day to be out riding. Even layers of Gore-tex and wool couldn’t keep the grimy water that lay in film on the road from seeping inwards, chilling me to my bones. The coastal scenery was beautiful though. I especially love the pine trees that grow defiantly, branches spread in one direction as if frozen in the wind. 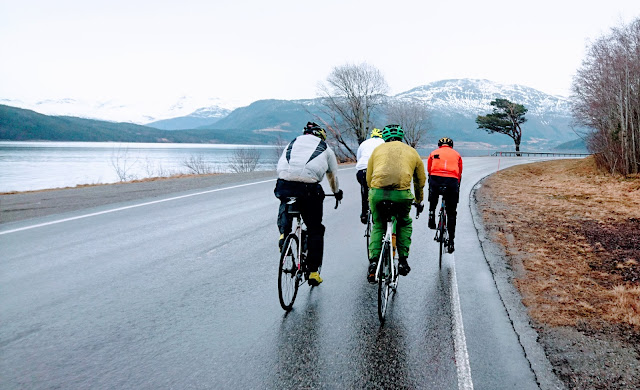 We ended our ride cold and thoroughly covered in grime, happy to have made it nearly 90 km in those conditions. Let’s hope for good weather on Jotunheimen Rundt!

Audun, Vibeke, David, Marius and I finally got together for a group ride at the end of April. We had great weather, and we got to practice drafting formations, which can save a lot of energy during a long race. Unfortunately my legs felt a little off all day, and I also felt like I couldn’t eat enough while on the bike. Looking back I realize that this ended up being my highest mileage week so far (254 km). Additionally, I later discovered that the ball bearings in my both of my wheels were pretty worn out after a winter of riding, causing unnecessary friction.

After Easter, Audun was nursing his broken shoulder (that’s another story), and I went to visit my friends Silje and Sigurd 45 minutes outside of Oslo. We put in a big loop around their home turf, passing through farmlands and over beautiful side roads through sun speckled forest. 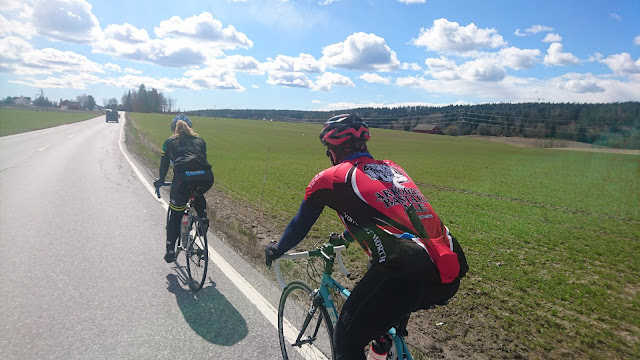 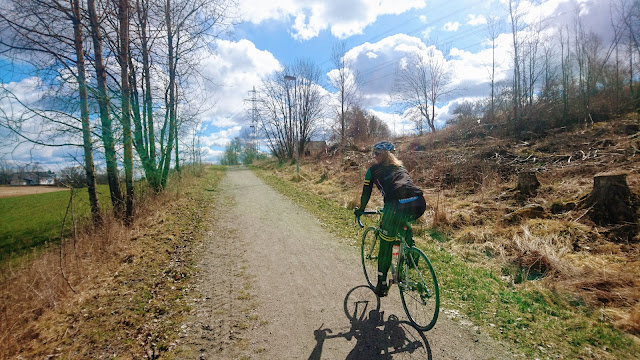 Unfortunately, the last hour or so dovetailed the highway, and we were riding into a headwind. I eventually insisted upon stopping for ice cream before riding the last stretch, which turned out to be a good idea as it ended our ride on a high note!

May 1 is an official holiday in Norway, and it fell on Monday this year. I raced Sentrumsløpet on Saturday, and put in a long run on Sunday (I’m trying not to loose all of my running fitness), so it only seemed fitting to put in a 150 km bike ride on Monday, completing a tough weekend.
Unfortunately, no of my friends wanted to go with me this time around. I actually kind of enjoyed riding solo, since I could set my tempo depending on my mood and didn’t have to worry about keeping up with anyone. I was also super efficient, stopping only twice during the entire ride. I had an audiobook on one ear just to keep mind my off the time passing - 7 hours is a long time to spend alone with yourself!

Phew, just writing about all my rides makes me feel more ready for Jotunheimen Rundt! Maybe I can do this after all!