It's been a couple weeks since our trip to Northern Norway, but I still have some pictures to share. After turning back from two tops in Lyngen, we headed to Tromsø to stay with some friends, and take down some peaks around Tromsø.

Unfortunately, the avalanche danger was bad all week, and we basically had to pick the flattest mountains around. Luckily, the weather was on our side for a while, and the snow conditions were pretty good.

Skiing flat slopes meant we had to look for other challenges:

Lyngen wasn't the only place avalanche danger keep us from going to the top - we turned on the ridge up to Gråtind. Although the ridge was mellow, the snow pack was unstable and it dropped steeply on both sides.

It was beautiful sunny day, and the snow was not too shabby: 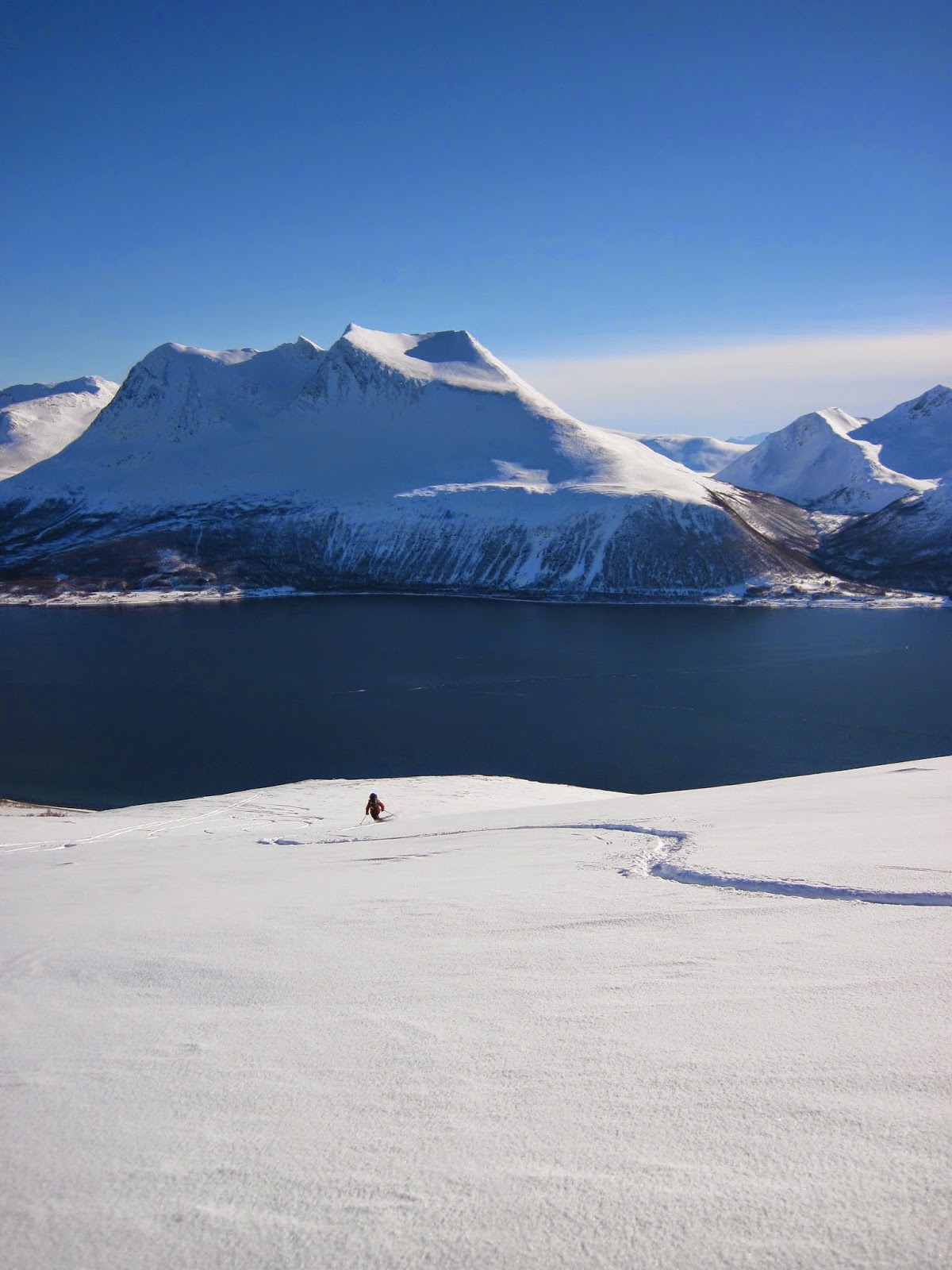 Towards the end of the week, the Parental Units flew up to Tromsø. My sister is a student in Tromsø, and on the weekend when she didn't have class it became a full-blown ski family reunion. The weather had turned on us, and when we headed up Fagerfjellet it was snowing with near zero visibility.
But low and behold, yr.no (the Norwegian weather service) was right - and it cleared off!
Our plane left in the late afternoon on the last day, so I squeezed in a final top: Lille Blåmann (which translates to 'Little Blue Man'), a real Tromsø classic. As we put our skins on in the parking lot, a taxi van filled with Italians suddenly appeared. One of the Italians jumped out, pulled out a map, and asked "Where are we?". It turned out they had arrived that day, and had the map for an area a little further east.
When we told them where they were, they asked where we were going, and decided to follow us up Lille Blåmann. They started maybe 15 minutes behind us, but eventually caught us on their twig-like skis and Dynafit bindings (and yes, I'm just snarky because my skis are so heavy!). Even though they were going faster than us, they ended up right behind us, because they didn't have the correct map and were relying on us to find the way.
This is the point at which I get rather annoyed. I kind of expect groups to be self-sufficient in the mountains, and they were also letting us do all the work breaking trail! Once we could see the top, they broke ahead and thankfully started to break trail. Let's just hope they got a map for their next ski tour.
On the way down, we passed hoards up people headed up. Clearly a popular peak, so it was nice to have gotten an early start.
A few hours later, on the plane back to Oslo, I waved farewell to Lille Blåmann. It had been a productive week, with 8 days straight of ski touring. Someday I'll go back and bag some of the bigger peaks - when the conditions are more stable!
- The Wild Bazilchuk
Labels: mountains pow skiing